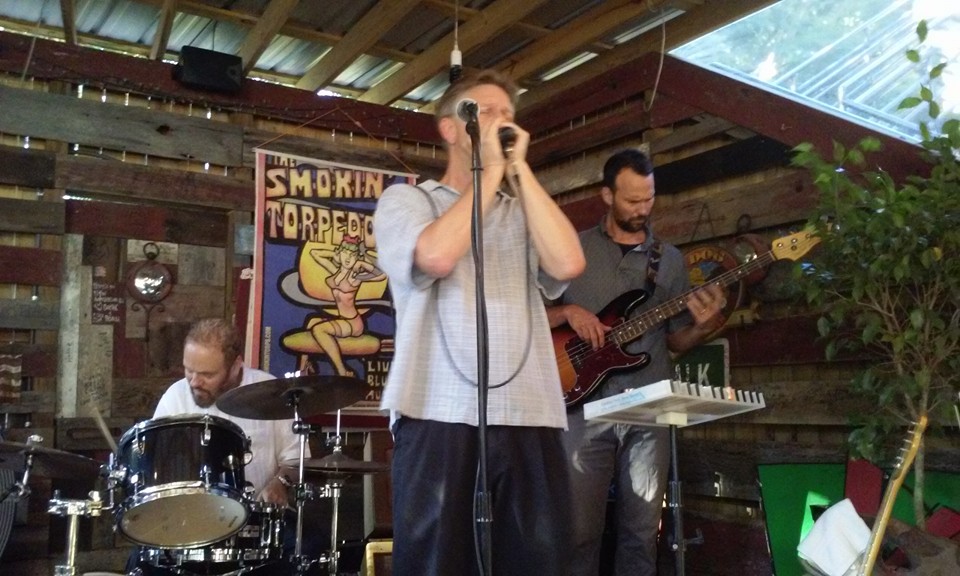 Jeff and his top-flight band The Smokin’ Torpedoes are well-known to lovers of live music here in Central Florida. Jeff is very good at his craft. By that, I don’t mean only the musical side; he’s a very capable promoter and has shown over and over that he’s got the mojo to plan it, promote it, sing it and play it and I love to watch him do it. All of it.

I first met Jeff back in 2004 when ten or so blues-focused musicians and supporters met to talk about the blues music we love so well and explore ways to help the blues thrive in Central Florida. Those early days at Cafe Annie were so much fun. Here’s a minor miracle for you: the memories of some of those jams way back when are still very vivid in my fast-failing, whiskey-soaked brain today.

The upshot of all of that was the founding of the Orange Blossom Blues Society. The OBBS is still trying to carry on its mission to “Preserve, Promote and Present” the blues in our part of the Sunshine State. Being a part of that was an awesome thing. And still is.

One of the things that made that time so good and satisfying as I look back is that it’s how I met some of the local blues musicians and supporters who have become my good friends over the last twelve years. I will be posting soon with more about the effort to get the blues crowd in and around Orlando to link up and pull in the same direction. There were so many people who put their “time and treasure” into that effort. And the OBBS is still going strong twelve years later.

One other thing about our merry band of blusers here in Central Florida: The showcase event for the OBBS is the local or first round of the International Blues Competition and that is happening tomorrow, Sunday August 7th, beginning at 2 PM. Details here.

I had to mention the early days of the OBBS as that’s how my path crossed with Jeff’s originally. My main reason for putting together this more modest post is simply to spotlight Mr. Willey and those Smokin’ Torps who have played a large role in moving the Central Florida blues scene forward. The line up has changed, has changed more than once. Some of those Smokin’ Torps have come and gone. And come again. But their brand of authentic, classic, semi-laid back blues has been consistently good and has made them one of the best damn bands anywhere in Florida.

The Torps are an ambitious, hard-workin’ band. I follow their bookings and catch them playing out every chance I get. If you’d like to have a look at their calendar, just follow this link.

If you’re familiar with Jeff Willey and those Smokin’ Torps he fronts, you don’t need Ol’ Bulldog here to tell you how good they are. If you’re not familiar with them, you should be! Have a look at the calendar and catch one of their shows soon; you’ll be mighty glad you did.

← How Much Fun are Zip Lines, Anyway?
Fave Fotos: Places That Aren’t There Anymore →