Congratulations to Chicago Bandits pitcher Shelby Turnier on another milestone in her stellar career. The former UCF Ace is now on the UNF staff. We UCF fans are fine with it. The Ospreys are not in our conference! Good on you, Shelby!

Source: Shelby Turnier on Instagram: “So I grew up a little today. I’m so excited to start this next chapter as an assistant coach at UNF!”

I was very pleased with the pix from that visit to Crane Creek Promenade in Melbourne. The one featuring Pete the Pigeon doing Warp 10 right past my face just might be the best one from that afternoon.

I’ll let you decide. It certainly is a fave of mine.

This park is known for being a spot where one can spot manatees; I didn’t have the good fortune to see any of those guys, but had decent luck with the pigeons.

By the way, the wall art adorning the back wall of a business on the street where the park is located is not a part of the park itself. But you see the murals easily once you’re on the park grounds. I loved them. I’ll make a couple of them a part of this posting, too. You may have seen those pix already two posts before this one.

It’s way later than I thought. Time for me to make short work of a grilled cheese, power down this computer and get some shut-eye!

It’s so true that gulls and pelicans make marvelous photo subjects. Here’s a pensive pelican from Brevard County who didn’t stay in this pose very long. I think I was just a bit too close for comfort and he took to flight. I got a good shot of him in full bug-out mode, too, as he cruised by.

Very rainy in Central Florida today. Not going to make it to the beach. But I have photos, don’t ya know…

I’m on vacation right at the moment. Will visit some great settings for photography before I have to turn myself in next Tuesday.

I visited Crane Creek Promenade in Melbourne two or three vacations ago. Liked the pix I got while I was there.

Will be heading somewhere in the next day or two to get a new passel o’ pix! But at this moment I’ll enjoy a few from a previous photo excursion.

Loved that yard. Spent a couple of thousand hours mowing, trimming, clipping and pruning over many, many years.

We had a deck put in about six years ago. Don’t have the house anymore but here’s a photo of the deck and two Adirondack chairs I bought at a yard sale. Not long after this photo, we had some serious patio furniture put on the deck, but I like this simple photo best.

The house and the chairs I loved so well are gone. Not gone, but gone. Nevertheless, the memories remain.

Source: Obama to create the largest protected place on the planet, off Hawaii – The Washington Post

On Tuesday night the Chicago Bandits took the Cowles Cup for the second straight year. I know that Professional softball is not on the typical sports fan’s radar, but I’m a serious fan of the game and watching the National Pro Fastpitch Championship was pure delight!

Those of you who know me from the real world, know that I have long roots in Central Florida; a part of my interest in the NPF league stems from the fact that the Chicago Bandits took former UCF pitcher Shelby Turnier in last year’s draft; I just loves me some Knights sports! She was the first pick in the second round, eleventh overall. Shelby had a very good year as an NPF frosh and really shined in the post-season.

Turnier got nine innings of work in three games in the NPF playoffs and didn’t allow a single run. Her ERA was 3.69 at the end of the regular season and shrank to 3.22 with her strong performances against the Scrap Yard Dawds and the front-running USSSA Pride.

As a staff, the Bandits performed well overall. Angel Bunner was solid — as was Michelle Gascoigne — but when you look at the stats, Shelby was on fire. She has positioned herself as one of the best relievers in the business, and she — and the Bandits organization — have to be very pleased with her inaugural season.

For more about National Pro Fastpitch, the only Womens’ Professional softball league in the U.S., follow this link.

The Early Years of the OBBS 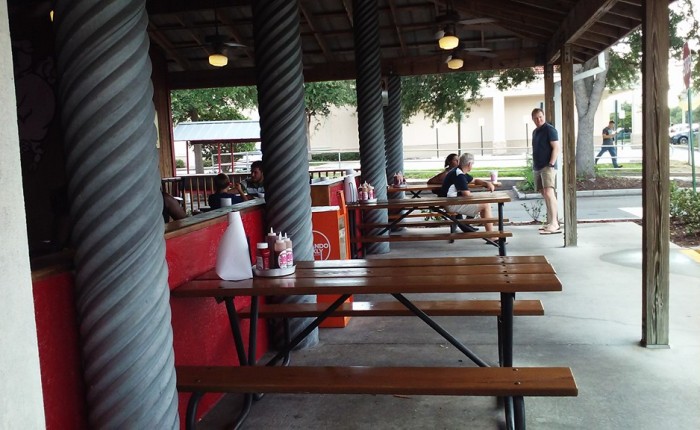 The best I can remember, I first visited Bubbalou’s Bodacious Barbecue back around ’85 or ’86… Not exactly sure. What I know for sure is that I’ve gone back about a bajillion times. And I’ll be going back many, many times more.

At the time I made that first killer visit to this Mecca of Florida barbecue, the Lee Rd. location was it. (If you haven’t been there, that’s just west of where Lee Rd. begins at Hwy 17-92.) I didn’t know that one day Bubbalou’s would have five locations. Or that they’d all be way bigger than the original one. And that people from every corner of the Orlando metro area would come to love their chow the way I did.

I prefer cafeteria-style service at barbecue joints, as you tend to have your dinner in front of you faster that way. That’s the system at Bubbalou’s. But their staff will be table side several times while you’re chowing down even though they’re not actual wait staff. You can tip at the time you order. They tend to fill up for lunch and because seating consists of picnic tables, you may be enjoying your selection with friends you haven’t met yet. But that adds to the charm of the place. And they feature a decent beer selection.

I’ve had five or six entrees, all told. I tend to order my faves over and over so it’s true that there are things on their menu I’ve never tasted. Some of my “stand-bys” that I’ve had a thousand times would include the Pulled Pork Sandwich, The Ribs and the Catfish Dinner. I recommend them all. If you opt for a sandwich, you can go with a bun or the grilled garlic toast you find at many barbecue restaurants; yeah, I know that “authentic” barbecue should come with plain white bread, but that is the one thing about old-school barbecue that I really hate. Give me the not-authentic garlic toast every damn day of the week!

Let me say one more thing about the catfish; it’s been consistently good and I go that route fairly often because catfish is not on the menu at most barbecue joints. So that’s one of the reasons I go to Bubbalou’s often.

Their sides are killer; there are many from which to choose. I especially love the collards and the black-eyed peas. But all the ones I’ve had are top-shelf.

I’ve been to four of the five locations; have not made it out to the Apopka store yet. Give me a little time. I’m not out in the UCF area that much, but the Alafaya location is huge and has a full bar and a substantial patio. You can play bean bag toss after dinner and they feature live music on weekends. I’ve visited that one four times in all; its vibe is quite different from the others. And, yes, you’ll see plenty of UCF kids there. Both as patrons and crew.

If you’d like to wrap a train trip around your lunch or dinner, the Altamonte Springs location is the way to go; it’s within easy walking distance of the Altamonte Sun Rail Station. I’ve gone that route and it was a lot of fun. In fact, they have a train rider special but you’ll have to show your Sun Rail pass.

They are family-friendly too. I’ve always seen every kind of diner on my visits. Check them out whether you’re with family, friends or “flying solo”, as is my usual custom.

Bubbalou’s accepts most credit cards. American Express is not on that list, however.

I am not going to list the addresses of the five locations here. For that, I recommend their site. To see the locations and their fabulous menu, just follow this link.

I love this photo. Took it at Cocoa Beach a few months ago. Once in a while an amateur shutterbug like me gets lucky. Maybe in life it really is all about the timing.

Hope you like it. By the way, the main reason I’m doing this blog entry right now is that I’m jonesing to get to the beach but can’t. Heavy sigh…

Hope you’re doing alright. See you at the beach sometime.

About Photography, Outdoor Fun, Food, Music, and Other Stuff.
Website Powered by WordPress.com.