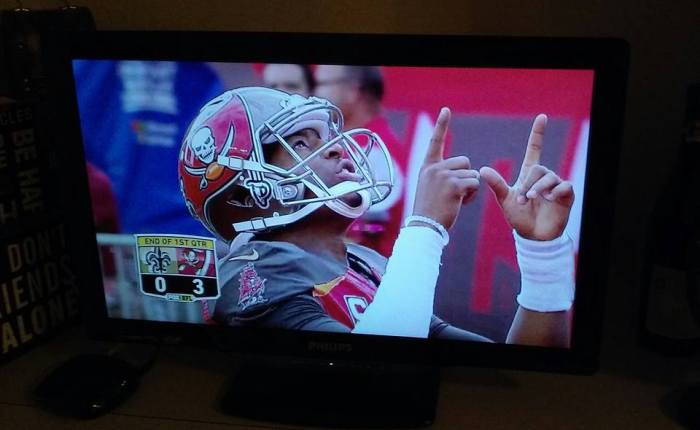 The Bucs are still in the chase for the NFC South Championship! As of this writing, the Bucs have won five straight and are tied with the Atlanta Falcons for the lead in the NFC South; both clubs have 8-5 records with three games left in the regular season.

If you weren’t tuned in for yesterday’s 16-11 thriller over Drew Brees and the Saints, it’s your loss! I enjoyed every minute of this one. Jameis, Doug Martin and wide-out Cameron Brate sparked the offense and the Buc’s D shined brightly, as it so often does; three interceptions of Drew Brees is a BFD and it really sealed the win on Sunday.

The three teams the Bucs will face in the closing weeks of the 2016 season are the NFC East leading Cowboys, then the Saints again and finally the always-dangerous Panthers.

Ol’ Bulldog is not going to say the division is a lock, but it’s great to see that they’ve got an excellent shot. Jameis Winston is all that and a bag of frickin’ chips and I’m quite sure the Bucs organization is still thinking that taking Jameis no. 1 overall two years ago was a damn good pick! He shone brightly in his rookie season and is doing quite well now in his sophomore outing. It does this long-time fan’s heart good and it’s just one more reason why the 2016 NFL season has been a good one.

The overall playoff picture will look much clearer after next week’s contests; for now I’m content that those of us who’ve followed the Bucs from  Day One are feeling good as we get into the last few weeks of the season.

And, if you also follow FSU, it’s very cool to note that place kicker Roberto Aguayo — another illustrious former Nole — has pretty much broken out of that freshman slump. Some fans have soured on Aguayo, as the organization used their 2nd round pick to get him, but I’m quite sure Roberto will have a long and good career in the NFL. Good to see these two FSU alumni tearing it up on the gridiron right here in the Sunshine State!

If you’re a Bucs fan too, and you missed it yesterday, here’s a link to the highlights. Well worth a look even if you did catch it in real time.